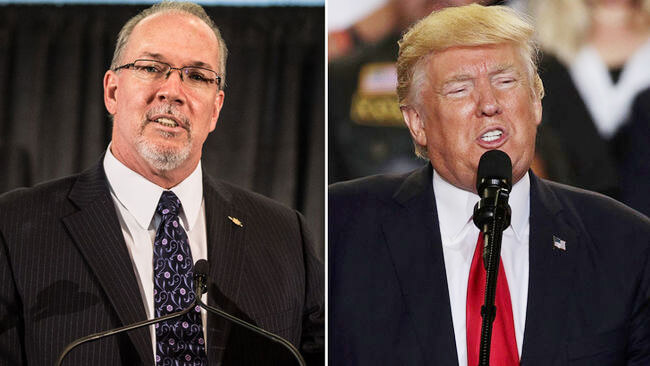 theQuestion: Which party leader should B.C. trust to face down Trump?*

Roars from U.S. President Donald Trump are reverberating across the B.C. political landscape. Trump has trumped our election, by making his trade policies and temperament factors for B.C. voters to consider when choosing the next premier of the province.

Most at stake for B.C. is the dispute with the U.S. over softwood lumber. Last week, the Trump administration decided to get tough on trade with Canada and announced import duties up to 24% on Canadian lumber. It’s bleak news for British Columbians as the forest industry built B.C. and continues to power economic growth in the province.

What to do about Trump? And, which candidate should B.C. trust to face down the menace?

I may be in a slightly shrinking majority, but the Greens are a fringe party. It’s unfathomable to think Green Party leader Andrew Weaver could engender respect and find common ground with a multi-billionaire, pro-development, pro-fossil fuel president. Does Trump’s entire ethos not contradict every principle the Green Party holds dear?

Also, Trump is decidedly pro-Israel. And I believe, no matter the protestations, the Green Party in B.C. is tainted by the shocking anti-Israel stance members of the national party endorsed last August. You can’t wipe away anti-Semitism with semantics — leaving calls for sanctions in place.

How about NDP leader John Horgan? No way. He’s too much like Trump — in temperament that is. Horgan is thin-skinned and quick to anger. He proved this in not one but two leaders’ debates. When in rhetorical battle he hurls invectives at opponents, while seeking to diminish and marginalize their positions. This tactic would get B.C. nowhere with President Trump.

There’s also the little matter of Horgan’s “non-congratulations” upon Trump’s victory. In a released statement regarding the outcome of the U.S. election, he lectured how British Columbians want change “for things to be better” and that reflects “our values” of “fairness” and “equality.” He said B.C. is “at risk” of becoming a province “where only the rich can thrive.”

Then, in fine social justice warrior form, the leader of the NDP states he hopes nobody in B.C. would “embrace the angry, sexist, prejudiced and divisive politics that carried Donald Trump to the White House.” Surprisingly, Horgan didn’t include xenophobic, homophobic, Islamophobic, and racist to the list. Maybe it’s implied.

Tsk-tsk Mr. Horgan, that’s no way to make friends with the President of the United States.