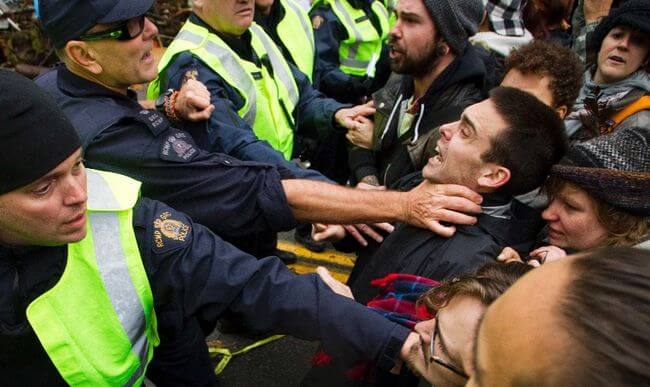 These Kinder Morgan protesters have a lot of nerve. Who elected them to speak for the “people?” No one. They only speak for a small hyper-ideological fringe that is radically hell bent on upending our entire economic system. A system that is historically responsible for lifting untold millions out of poverty, providing food and shelter to a rapidly growing world population and for fostering scientific, technological and medical advancements unparalleled in human history.

What? You thought the protests on Burnaby Mountain are all about Kinder Morgan — an evil Texas oil company coming into our back yard to install an environmentally dangerous pipeline. No, the protests have nothing to do with an impending danger to the local environment. It’s all about fighting capitalism and the primary target is the fossil fuel industry. Why? Because fossils fuels powered the industrial revolution, they accelerate growth and are responsible for the capital accumulation and prosperity we enjoy today — which the protesters scorn.

Simon Fraser University professor Lynn Quarmby said it best last week after getting arrested for the cause. She told Global BC “we are seeing a movement that is growing across the country, a movement against the expansion of the tar sands, a movement against fossil fuel infrastructure of any sort.” Seriously? These protesters realistically expect the country to stop building and maintaining energy infrastructure and to go as far as to shutdown the oil sands — by the way there is no actual ‘tar’ there, the term is pejorative.

It is for this very reason the people protesting Kinder Morgan will make no difference. Their demands are unreasonable and entirely unfeasible. And I suspect they know that. While most chant their slogans with religious fervent, the cause — climate change — is merely the issue of the day for which these protesters currently rally around in order to push a militant anti-capitalist, anti-corporate, anti-government agenda.

There is more than just a little anarchist feel at the protests. I was disgusted by the threats and sentiment displayed on signs at the mountain that said “Danger Traps Ahead,” “Your laws don’t mean shit here turn back”. Do these signs represent the protesters Laila writes she is so proud of this week? I hope not.

This is no Clayoquot Sound. Back in the 1990’s, protesters made their stand and then worked with the forest industry to revamp forest practices. I see no room for compromise from these protesters today.