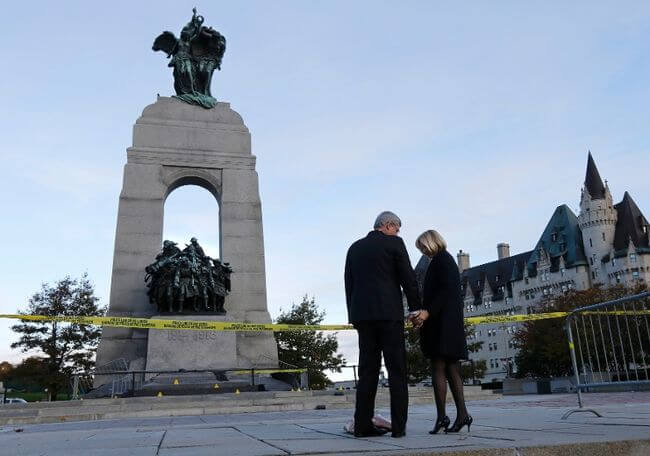 theQuestion: Is suspicion alone enough reason to allow Canadian law enforcement and security services the right to spy on Canadians?*

Gene Hackman delivered one of my favourite lines in the 1995 movie Crimson Tide. Playing Captain Ramsey of the U.S. nuclear submarine Alabama he said, “We’re here to preserve democracy, not practice it.”

While just a film, there is truth behind those words. In the aftermath of the two recent deadly acts of terrorism committed by Canadians against Canadian soldiers on domestic soil, the Harper government is stepping up efforts to provide law enforcement and security services greater powers to conduct surveillance on terror suspects in Canada.

I fully support these efforts.

There are two sets of expanded powers coming into play. Prior to the recent attacks, the first had already been written into Bill C-13 — the anti-cyberbullying law. Bill C-13 has passed the House and is now at the Senate. The second is Bill C-44, which was tabled last week and gives Canada’s spy agency greater powers to conduct surveillance abroad.

It is Bill C-13 that has civil liberty advocates in a furor as it lowers the threshold police must meet in order to gain a court order to conduct surveillance on Canadians here at home. That surveillance could include typical digital data mining like online website history, communications, vehicle tracking and banking.

If Bill C-13 is passed, police will be able to obtain a court order for surveillance based on reasonable grounds to “suspect” that a person may commit or has committed a crime, instead of the higher threshold of “believe.”

If you think this sounds like semantics, it’s not. The change will make it easier for police to obtain surveillance court orders. That’s the point. It should be easier.

Canada faces a real external threat, one that is recruiting and radicalizing soldiers here at home. I know this sentiment is anathema to many — making the argument of the enemy within. However, we have to wake up to the stark reality that our own citizens are being radicalized and pose a real threat to our democracy.

Last week, Canada’s information commissioner Suzanne Legault called for greater civilian oversight of law enforcement if the new powers are enacted, saying Canadians need appropriate information to make intelligent decisions about the necessary level of security. I disagree. We need to have some faith in our security systems and trust that “suspicion” is reasonable enough.

If we have to bend a little to preserve democracy, then it’s good practice.