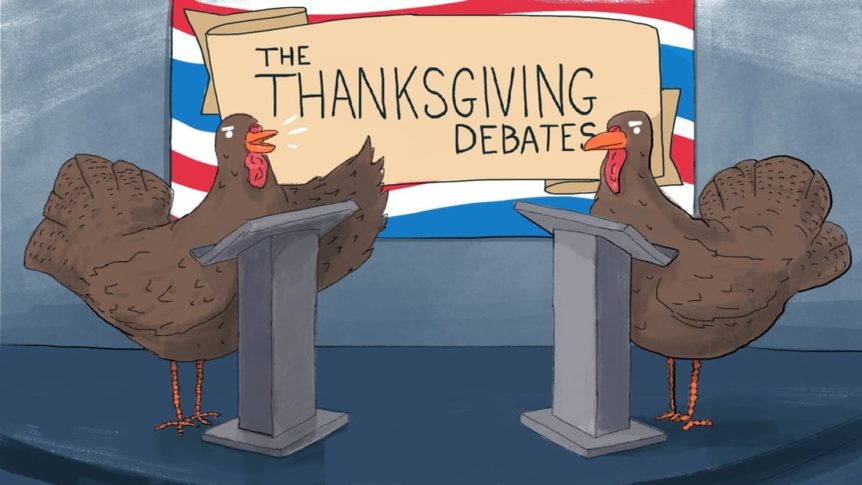 theQuestion: Do you believe her?

If you are a Conservative and believe as I do, that human beings are not born good and carry within themselves the capacity to do great evil, then over the next seven days we share a common battlefield: Canadian Thanksgiving. And, oh yes, it is a battlefield.

If you haven’t figured it out yet, your friends and family are out to get you. They will pin you to a corner of the dining room table and launch a massive assault, attacking your political positions, values and beliefs. While their beliefs are progressive and virtuous, yours are reactionary and deplorable, at best.

When your loved ones are done with you, you’ll be stripped bare and left in far worse shape than that poor turkey you may never be allowed to eat. It’s a bleak picture I know.

But there’s hope, as our squirrely opponents may have finally walked off the cliff this year.

Here are few thoughts on how to fight the good fight this Thanksgiving.
The first thing to do upon greeting your loved ones is to inform them of your preferred gender pronouns and declare you are “not a gang rapist.” This is an excellent start as it’s both mocking and shocking at the same time.

Without a doubt, the top topic over turkey will be the allegations of sexual misconduct leveled against Trump’s Supreme Court nominee Brett Kavanaugh, which are said to have occurred near four decades ago.

You will be asked: “Do you believe her?” And, the only honest answer should be no.

During her testimony on Thursday, the accuser, Christine Blasey Ford, obfuscated on direct questioning and only further clouded the so-called “facts” of the case.

Not only did she confirm she could not remember the year, time or location of the house party where the alleged assault took place. But also, she doesn’t remember how she got to the party or how she got home after. Yet, she testified to clearly remembering that she only had one beer.

Curious to have such clear recollection about one detail and massive gaps in memory for most others. Indeed, not only did her memory fail her on the details of the unreported assault from 36-years ago, she was confused and non-responsive on events that occurred during the past two months.

I advise to not engage in a fact or lack-of-fact battle on this issue.

Instead go straight to the heart of the matter and challenge the ‘all women must be believed’ dogma.

If you are asked do you believe her?

Respond with a question: Do you believe men and women are the same?

Progressive dogma states there are no differences between the sexes (or genders), and the capacities and capabilities of the sexes are the same.

If your interlocutor is a woman, she knows how women behave. So, remind her that both sexes are capable of lying and that’s why the foundation of our justice system is based on the presumption of innocence (make sure to mention the Salem witch trials—just for fun).

Obviously, you will be harangued on a host of other issues: Trump, God, climate change, white privilege, transgender pronouns, toxic masculinity, colonialism (a Canadian Thanksgiving favorite) and the value of your very existence (be alert for this one).

I have not space or time to provide you ammunition across the board.

But do keep the following in mind. Our opponents, both male and female, are of the type (an ancient, always with us type) that is capable of deceiving others while fooling themselves.

They are, their own useful idiots.

Stand-up for your values and beliefs. Never equivocate or back-down. And always, say please when you fight for your ‘fair share’ of the turkey.