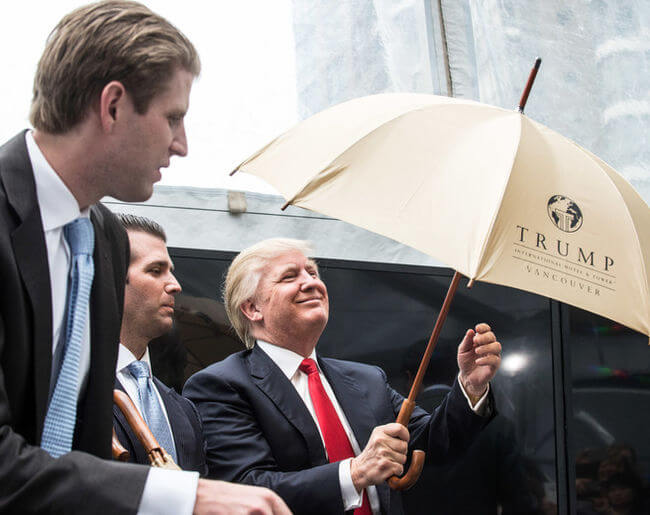 theQuestion: Would Canada be better off with Trump?*

Glory be to the Trump.

At least for millions of Americans who believe what Trump is selling — he is the saviour who shall “make America great again.” President Donald Trump, it has a nice ring to it.

Despite being outright dismissed as a serious candidate for the Republican presidential nomination by the media, political pundits and opponents, Trump is soaring in the polls. According to a CNN/ORC poll released last week, Trump is now the clear leader with support of 24% of registered republican voters, eclipsing Jeb Bush his nearest rival at 13%. Trump is also now within 6% of Democrat Hillary Clinton in a general election match up.

Trump’s success defies the normal laws of politics. Trump launched his campaign with a diatribe against Mexican illegal immigrants — he proposes deportation and building a wall along the border. Trump sparred with Fox News anchor Megyn Kelly walking close and if not over the misogyny line. And, Trump’s latest salvo is a promise to do away with granting citizenship to children born in the U.S. to a noncitizen mother — referred to by Trump and others as “anchor babies”.

Despite all this, or because of it, Trump appears invincible. His plain speaking, tough talking approach is striking a chord with many Americans and maybe not so surprisingly, with some Canadians too.

Trump promises to unleash the ruthless tactics that made him a multi-billionaire in order to fix the economy and upend political gridlock. Trump exclaims he is too rich to be bought by lobbyists and would be China’s worst nightmare as he negotiates trade deals to bring jobs back to the homeland.

Canada could use some of this kind of moxie. Sure, Trump offers charisma, if not charm. But in the end, Canada would be better off with a Trump, even if only a low calorie facsimile.

When was the last time Canadians were offered anything other than a career politician for prime minister? We get lawyers, political operatives, activists, academics or union leaders — where are the business tycoons?

Politics in Canada would be so different if we had a Trump. The Harper government’s dedication to obfuscation would be an impossibility under Trump-styled leadership. So too the political corruption we experienced with the Liberals and the sponsorship scandal.

Maybe it’s desperation, but I am exhausted with the bland — Harper, the ideologue, Mulcair and the one who is just not ready, Trudeau.

May we please have a little Trump?