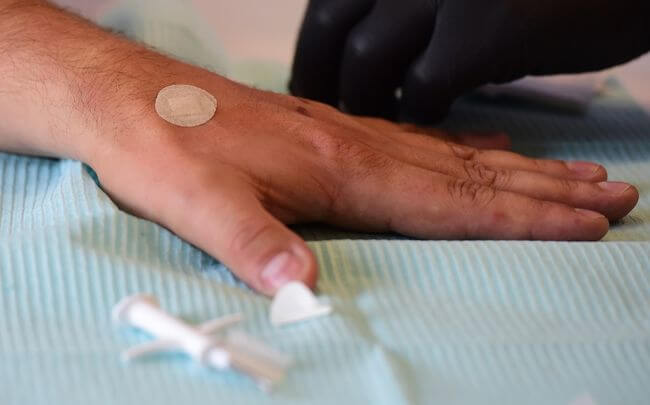 theQuestion: Should people be alarmed at the prospect of wireless implants to monitor bodily functions?*

Our love affair with technology is far from a recent fling, it’s a centuries old marriage marked by passionate swings and societal upheaval. Of us, technology demands trust and blind faith in its promise to deliver an easier, longer and more fulfilling life. Yet often, the benefits come at a heavy price, with unforeseen long-term impacts.

Alarm sirens should be wailing over the recent advancements in a new technology known as “electroceuticals.” Engineers at UC Berkeley have cracked the millimetre barrier producing the first dust-sized wireless sensor small enough to implant into the body and be parked next to a muscle, nerve or organ.

Ultrasound transmits real-time data and control commands to and from the devices — known as “neural dust” sensors — with the promise to treat a wide range of disorders afflicting the nervous system, spinal cord and the brain. Super-tiny and inserted super-deep, the battery free devices — about 1 millimetre cubed — monitor bodily functions, manipulate neural connections and control next-generation prosthetics worn by amputees.

Scientists hope these devices could be effective in tamping down on the symptoms of epilepsy, controlling the bladder and even suppressing appetite.

The gifts of such new technology may truly be bountiful, but as so often is the case, just because it can be built we fail to ask, should it be built? I am usually not one for conspiracy theories — unless they involve Hillary — but, I have to wonder what dark forces could be unleashed in a world where millions of people have hundreds of tiny neural dust sensors gathering and transmitting the most personal of information into external computer networks?

We already have zero ability to keep foreign actors, hostile groups, not to mention cybercriminals, from hacking into the most secure and sensitive databases. If they gained access to in-body telemetry from a head of state or sent nefarious commands directly into their brain, what havoc they could wreak.

It’s not so implausible. Suspiciously, research into electroceuticals is being advanced and funded by the U.S. Department of Defense through its most secretive agency the Defense Advanced Research Projects Agency, known as DARPA — the agency responsible for developing high-tech military weapons. The neural dust sensor is born from a DARPA funded weapons program and DARPA is also the organization responsible for creating the Internet.

Alarm bells should be ringing, as neural dust technology could be injurious to society, with ramifications that are hardly unforeseen.