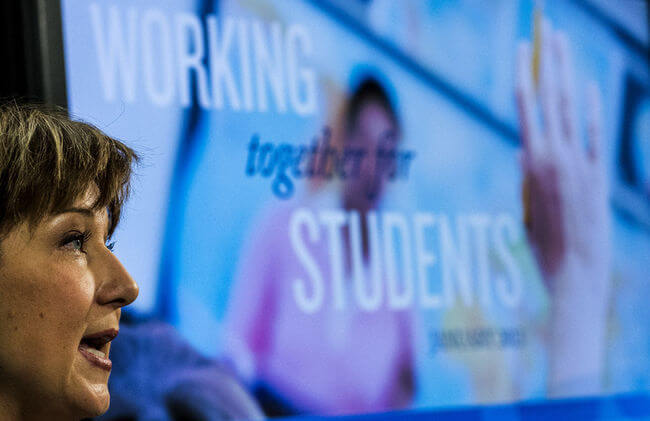 theQuestion: Should the provincial government appeal the teachers ruling?*

I take exception to arguments the provincial government has failed to support families, students and teachers. While the government has been dealt a blow by the B.C. Supreme Court in its ruling that government legislation — which deleted parts of the B.C. Education Improvement Act affecting class sizes — is unconstitutional, it is not accurate to characterize government actions as anti-teacher or anti-student.

The B.C. Liberal government, like every government before it, is embroiled in an acrimonious battle with the B.C. Teachers’ Federation over the direction and funding of public schools. Negotiations between the parties are tumultuous at the best of times and will be more difficult if the government is forced to negotiate under the threat of immediately restoring rules around class sizes, which date back to the NDP government of the late 1990s. It makes sense for the government to seek an injunction to stay the court decision while it appeals the ruling. Cooler heads must prevail and a suspension of the order will do that.

According to the government, restoring class size and composition to previous levels could cost as much as $1 billion dollars. The BCTF argues this funding is critically needed in order to shore up the quality of public education.

However, facts don’t support this position. Enrolment has been steadily declining — with nearly 22,000 fewer students since 2007 — so previous levels of funding set years ago simply no longer apply. And our system continues to produce the best students in the world.

According to the Organization for Economic Co-operation and Development, B.C. students outperform every other province and are in the top echelon of the world. The OECD tested 21,000 students across the country and found B.C. students are the best in math, reading and science in Canada. When compared to leading countries in the study, B.C. students rank eighth in math, sixth in reading and sixth in science. The argument the B.C. Liberal government is somehow undermining our public education system simply does not square with reality.

Could we do more? Yes. We could spend more on special needs students and we should find more money for teacher salaries. B.C. teachers are the lowest paid in the country and clearly they are turning out the best students. If we spend a billion dollars on hiring more teachers we do not need, it will be a long time before the province can afford to give our current teachers the raise they so richly deserve.