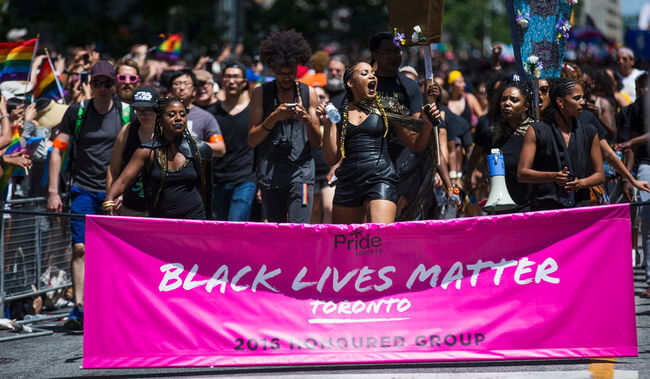 theQuestion: Should uniformed law enforcement be welcome to march in gay pride parades?*

Furor over police participation in Pride parades are another example of how far-left radicals seek to unearth old injustices and conjure new oppression in an era of unprecedented tolerance and diversity.

Old injustices are exactly what Garth outlines this week. Yet, events from 50 years ago provide no justification to ban uniformed law enforcement from marching in Pride parades today.

The battle for LGBTQ rights is over. This is demonstrated by inclusion in Canada’s human rights code guaranteeing full equality in marriage, workplace, government and the courts. Public acceptance is the majority and protestation to the otherwise is met with swift opprobrium.

Pride Toronto abandoned its stated values of diversity and inclusivity when it caved to demands from Black Lives Matter Toronto and banned uniformed police from marching in this year’s parade.

Also under intense pressure from BLM, the Vancouver Pride Society came close to an outright ban for its August event, settling on a perverse 20% quota of uniformed officers, with the rest allowed to wear T-shirts. No police vehicles or floats allowed.

Decisions to limit or ban uniformed law enforcement are an affront to values the LGBTQ movement championed for decades and could threaten to undo the relationship of trust built between the community and law enforcement.

This is precisely why Black Lives Matter is pushing to drive a wedge between police and the LGBTQ community, with the intention to widen it out into the general public.

These bans besmirch law enforcement. No two ways about it.

Black Lives Matter purports to fight anti-black racism, yet its tactics and rhetoric appear to stoke anti-white sentiments. An enormous list of racially charged demands is found on BLM Toronto’s website. And, a visit to the Blackness Yes website, a sister organization, further clarifies the movement considers Turtle Island, that is North America, to be under colonial oppression. It seeks to end it. Colonials are white. Readers can draw their own conclusions.

There is nothing mainstream about BLM and Pride organizers should be ashamed for capitulating to these illiberal thugs.