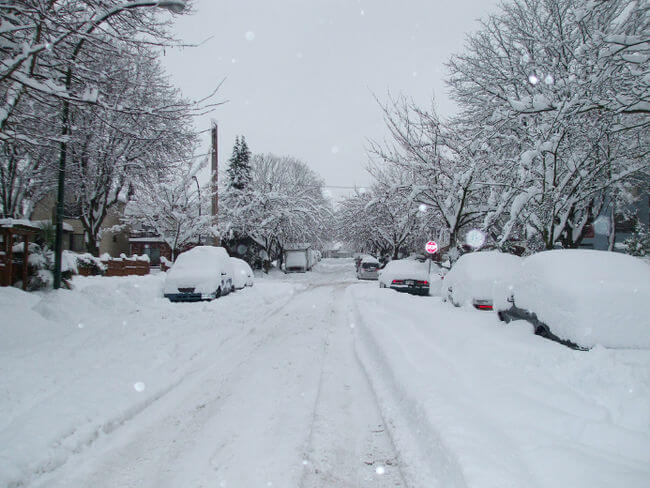 theQuestion: Should the City of Vancouver crack down on property owners for not clearing sidewalks of snow and ice?*

Occasionally, I win The Duel before writing a single word. This week may be just such a case, as my Duel colleague fails to squarely address the premise up for debate — whether government should use coercion to force property owners to clear sidewalks of snow and ice.

The issue is not unique to Vancouver, which is experiencing a relatively severe bout of winter weather. Similar to many Canadian cities, Vancouver’s bylaws compel property owners and landlords to clear snow and ice from sidewalks that surround their property by 10 a.m. the morning after a snowfall. If owners fail in this responsibility the city issues notices and fines — 1,700 warning notices so far this winter.

If these measures go unheeded, the city could clear the sidewalk and bill the property owner or prosecute the owner as the City of Vancouver is currently doing — taking 36 owners to court.

Instead of tackling the issue head on, my Duel colleague provides a tepid nod to the City of Vancouver for exercising its “right to encourage those who flake on the job to get shovelling.”

Why does Garth evade the question? As he points out, he has a master’s in sociology, leading one to assume it a cakewalk to deliver a rousing rebuke of the evil, heartless, private property owner, whom without forced compulsion by government, would leave sidewalks under their rule as icy death-traps.

Perhaps, it is because even the Left knows that no bylaw or government should be or could be depended on to pull communities through storm and strife — only individuals banded together out of self-interest in bettering community could do that. Talk of “atomized” residents, precarious housing and people shivering in the streets is trite and not a valid third-way to argue out of this Duel.

The lack of social responsibility in our communities is a direct result of the thousands of government laws enacted to legislate behaviour — like the snow and ice clearing bylaws — which aim to compel citizens to do good. Any sense of one’s own duty to do good — to care for one’s neighbour — is eviscerated once government takes over the role of caregiver, protector and adjudicator in our lives.

Let the free market solve the snow and ice problem. Businesses lose business when customers can’t safely navigate into their stores. And, property owners respond quickly when insurance companies tire of paying out claims. Government should stick to clearing the roads.