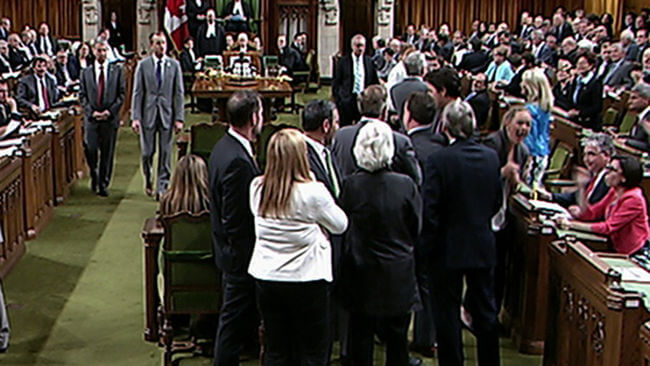 theQuestion: Should recent incidents of “manhandling” be admonished?*

Liberal media continues its love affair with the term ‘manhandling’ even as it uses it in horror to describe the actions of its beloved Justin Trudeau. It appears our prime minster is guilty of manhandling a Conservative MP on the floor of the House of Commons and accidentally knocking an New Democrat MP with an elbow during the tussle. So what?

The prime minister is not the only Canadian of high stature to recently handle someone roughly. Canada’s ambassador to Ireland Kevin Vickers helped subdue an Irish political protester who started screaming at a solemn ceremony commemorating British soldiers killed during the Easter Rising. The protester is lucky, not knowing who he was dealing with.

Vickers is the former House of Commons sergeant-at-arms who shot and killed Michael Zehaf-Bibeau, the terrorist gunman who murdered a Canadian soldier then stormed Parliament in 2014. Vickers is a hero.

Another who deserves praise is Trudeau. Lost in all the chest-thumping over his rough play and salty language is the verifiable fact that NDP Leader Thomas Mulcair and a handful of NDP MPs were physically blocking Conservative MP Gord Brown from fulfilling his duties as Official Opposition Whip in moving the house forward for a vote on Bill C-14, medical-assisted dying.

Mulcair and his cronies were not dallying around. They formed a phalanx, standing shoulder to shoulder on the floor of the house and shuffled left to right in unison to physically prevent all attempts by Brown to pass. When he tried to go around, another group of NDP MPs blocked his flank. It was then our prime minister jumped in to free democracy from NDP obstruction.

The NDP tactics were disgraceful and pathetic. Could Trudeau have handled things better? Yes, he could have stood his ground after and admonished the NDP — then dispatched the spineless Conservatives who sided with the Dippers only to score a few short-term political points.

Trudeau made a mistake apologizing. After all, the NDP is fighting for minors and those suffering from depression to be allowed to kill themselves with the assistance of a doctor. The Liberal bill is an agonizingly balanced compromise. The NDP position is morally bankrupt.

Mulcair is lucky Trudeau wasn’t trained by former prime minister Jean Chrétien in the ‘Shawinigan handshake.’ When confronted by an obnoxious protester in 1996, Chrétien grabbed him by the throat and forced him to the ground. He won my vote.