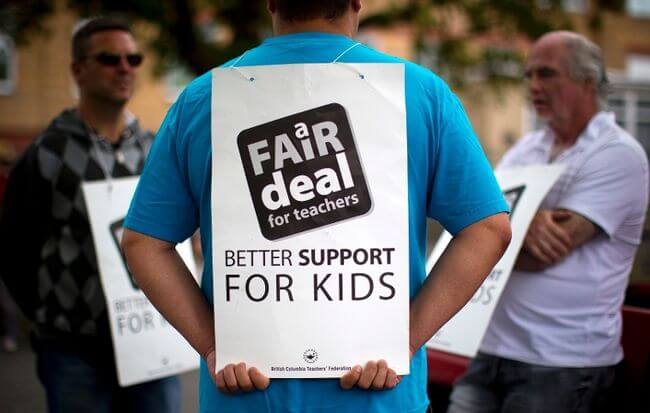 Can reasonable people disagree in a reasonable fashion? I like to think so. Watching the B.C. teachers’ labour dispute unfold has me beginning to think otherwise. The B.C. Teachers’ Federation’s demands, tactics and rhetoric in bargaining with the province are not reasonable and the BCTF has overplayed its hand.

The union has led its membership over a precipice, is failing in its responsibility to represent and protect its members, and is dangerously close to abrogating its authority to negotiate on behalf of B.C. teachers.

Last week, the BCTF made a terrible decision — it allowed its members to go out on a full-scale strike before the union had presented the government with its financial terms to settle the dispute. Teachers walked off the job on Tuesday and it wasn’t until Wednesday morning that the union finally came to the bargaining table with a fully costed financial proposal for settlement.

How could the government have settled the dispute prior to a full-scale strike when the union had not yet presented its fully costed demands? The government had nothing to agree to.

Regardless of the reasonableness of its newly presented demands — a $225-million class size fund, $225 million for benefits and to settle grievances, 8% wage increase and $150 million in signing bonuses — everyone, including teachers, should be furious at the BCTF for engineering such a drastic disruption to the education system. After 18 months and countless cries from the union that the government was bargaining in bad faith, it’s clear to me the union had yet to bargain at all.

This is either negligence or the BCTF wanted to go on a full strike. Either way, it’s damning and only reinforces my belief that B.C. teachers would be better off without their union. You should expect your union leadership to do everything they possibly can to negotiate an advantageous deal without the membership having to go out on strike. Failure to do so would result in damage to the cause and injury to the membership. The BCTF has not taken reasonable care to prevent this injury.

The union has also engineered this strike at the worst possible time for leverage — at the beginning of summer and with a depleted strike fund to cover lost wages. The union has bungled its job. All parties would be better off if the BCTF was delisted as a union and some alternate process of negotiation with teachers was found.