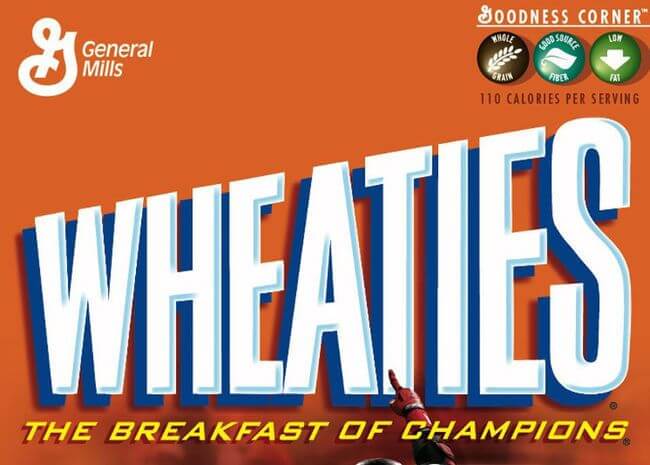 theQuestion: Should Caitlyn Jenner Be Featured On A Box Of Wheaties?*

It is one of the most successful product rollouts of all time, the celebrity introduction of Caitlyn Jenner. Or, the death of Bruce Jenner and public birth of what he says is his true self — the suffering 65-year-old woman, long trapped in a male body.

Jenner used that male body to win gold for the U.S. in the decathlon at the Montreal Olympics in 1976. He became a national hero and assumed the mantle as one of the greatest athletes of all-time — immortalized on the front of the Wheaties box — the breakfast cereal of champions.

Fast-forward nearly 40 years and he is now she and the calls are out for Jenner to once again have the honour — but why and for what?

There are those who call Jenner’s gender transition and public media campaign courageous and heroic — I fail to see it that way. General Mills puts star athletes on its boxes of Wheaties to promote lifestyles that people can aspire to.

I see nothing about Jenner’s journey towards womanhood that society should aspire to.

The unintended consequence of tolerance is an intolerant coercive pressure to conform. Not to the norm, but to the new “tolerant” way of thinking. And in the case of children, that means if little Johnny likes playing princess and wearing dresses or little Jane likes Tonka trucks and blue jeans, then it’s off to the nearest gender-identity clinic for reassignment — male to female, female to male, or to a more ambiguous identity.

Don’t believe me? In the last five years the number of children under the age of 11 being treated for gender-identify issues in Canada, the United States and U.K. has skyrocketed, with kids as young as three dragged into gender clinics by their oh-so-tolerant parents. In an effort to be politically correct, adults are making decisions for children that can’t be undone.

Before puberty, these confused kids are being placed on gender transition paths and in some cases at the first sign of puberty they are placed on hormone therapy drugs to block pubertal development — making the physical transition to the alternate gender easier. This should be considered child abuse.

Equal rights for the transgendered? Absolutely. Celebrated on a box of Wheaties? I should say not.